Emphysema is part of a group of diseases called Chronic Obstructive Pulmonary Disease (COPD) that also includes chronic bronchitis. People with COPD have damage to their lungs, making it difficult for air to get in and out interfering with the lungs’ ability to deliver oxygen to vital organs.

Emphysema is a chronic lung condition caused by the damage to the alveoli, the tiny air sacks in the lungs where the exchange of oxygen and carbon dioxide occurs. This leads to breathlessness, the main symptom of emphysema. In addition to compromised gas exchange, the damage to the alveoli leads to the loss of lungs’ elasticity and results in air getting trapped inside the lungs. This makes the lungs abnormally large, further exacerbating the feeling of breathlessness.

This is why some of the treatments for emphysema are aimed at lung volume reduction, for instance endobronchial valve treatment 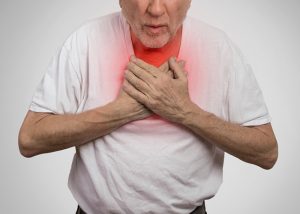 Symptoms range from mild to very severe and may also include the following:

The most significant cause of emphysema is cigarette smoking. It is also the most preventable cause. Other common risk factors include air pollution, passive smoking, work related exposure to dust and other occupational pollutants and genetic disorders, such as alpha-1-antitrypsin deficiency. Older age is a significant risk factor for emphysema and is likely to become even more relevant in the future as our population ages.

Frequent exposure to cigarette smoke leads to destruction of lung tissue and also causes inflammation of airways. Eventually this results in air flow obstruction. Cigarette smoke destroys the protective lining of airways, which means that mucous secretions cannot be cleared effectively. At the same time, mucus production increases, which can lead to respiratory infections. Air pollution has a similar role in development of the disease as it causes inflammation of airways and destruction of lung tissue.

Trypsin is a digestive enzyme, most often found in the digestive tract, where it is used to help the body digest food. It is also released by immune cells in their attempt to destroy bacteria and other material. The destruction of tissue by trypsin produces similar effects to those seen with cigarette smoking.

How is emphysema diagnosed? 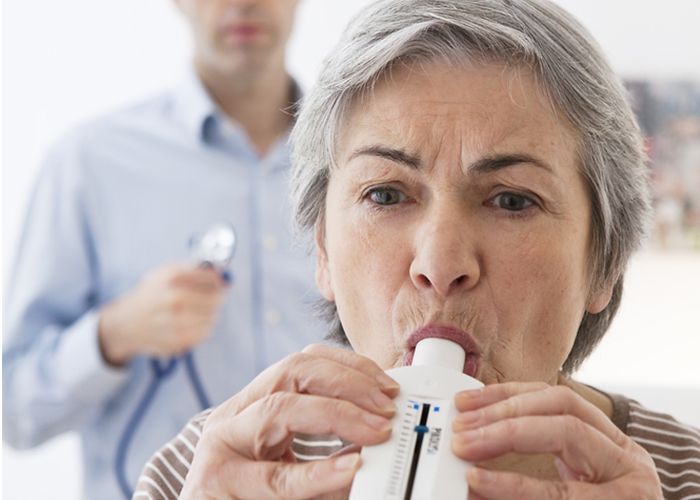 You may have difficulty breathing or have a persistent cough, but these symptoms alone do not mean that you have emphysema. On the other hand, many people who have emphysema may not be diagnosed until the disease is quite advanced and is therefore more difficult to treat. Your doctor may perform a number of tests to diagnose emphysema and determine the severity of the disease.

In the first instance, your doctor will ask you some specific questions about your general state of health and your condition, as well as conduct a general physical examination. They will mainly focus on your heart and lungs by measuring your blood oxygen levels, assessing the rate and pattern of your breathing and by listening to the breathing sounds of your chest.

Spirometry is the most common lung function test. It objectively measures the degree of airflow limitation caused by narrowing of the airways as a result of COPD. It is a non-invasive and readily available test. Spirometry is used to detect emphysema as well as track the progression of the disease and the effectiveness of treatment.

The test is performed in the clinic and involves inhaling fully and then breathing all the way out into a device called a spirometer. This provides information about the flow and volume of air entering the lungs.

This test is particularly important to perform if lung volume reduction is being considered as a possible treatment.

Another measurement of lung function, which is easy to perform, is the carbon monoxide transfer test. It helps to estimate how well the lungs are performing their most basic and most important function: getting oxygen into the blood stream.

Arterial blood gas analysis measures the levels of oxygen and carbon dioxide in the blood from an artery. This is generally used for patients with severe disease and those being considered for oxygen therapy.

Exercise testing allows lung and heart function to be measured under the stress of exercise. Cardiopulmonary exercise tests may be useful to differentiate between breathlessness resulting from cardiac or respiratory disease, and may help to identify other causes of exercise limitation. Walking tests such as the 6-minute walking test evaluates the distance you can walk in 6 minutes and provides an indication about your exercise capacity.

Chest x-ray is often done but it is not sensitive for the diagnosis of emphysema. It is mainly done to exclude other diseases such as lung cancer.

Providing detailed images of the lung structures, high resolution computed tomography (HRCT) scanning can help diagnose the presence of emphysema and determine its type and extent.

If emphysema is diagnosed, HRCT scans can be further analysed using specialised software to give physicians even more useful information. For instance, it can accurately predict the likelihood that patients will respond to certain types of treatments, such as lung volume reduction with endobronchial valves.

The ventilation and perfusion scan is used to measure the circulation of air and blood in the lungs. This helps your doctor to evaluate how much blood flows to different parts of your lungs. This is important to know because if blood flows to the areas damaged by emphysema, the exchange of oxygen and carbon dioxide may be impaired. These scans also help assess whether patients would benefit from surgical or endoscopic lung volume reduction.